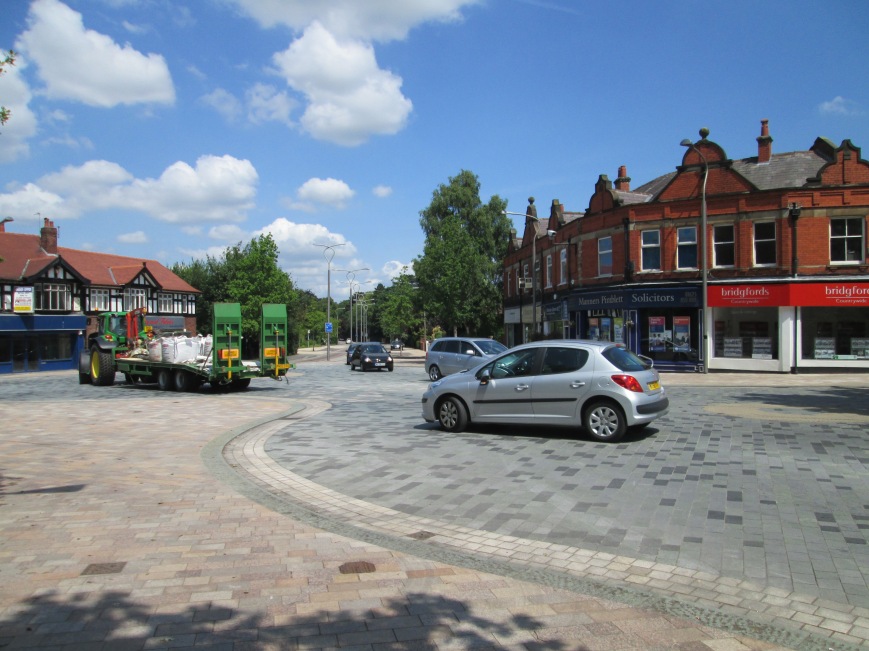 Shared space –  where pedestrians and traffic share the same, deregulated space – is one of the most controversial concepts in contemporary urban design.  Branded as “a planning folly, an architectural conceit” by Lord Holmes, shared space schemes have provoked a mixed, and often passionate, response from advocates and opponents.

Advocates claim that shared space schemes have a number of benefits; they can improve the urban environment and revitalise town centres, reduce congestion and vehicle speeds, and improve traffic flow and road safety.

However, opponents such as Lord Holmes have argued that shared space schemes – particularly the removal of kerbs and crossings – are dangerous and exclusionary for vulnerable groups of pedestrians, such as blind and partially sighted people, children, wheelchair users and other people with reduced mobility, and people on the autistic spectrum.

Numerous terrorist incidents have also emphasised the vulnerability of pedestrians to vehicles, with many authorities now putting barriers in place to prevent such occurrences.

In response to these controversies, the Chartered Institute of Highways and Transportation (CIHT) conducted a review of shared space schemes in the UK; the findings of which were published earlier this year.

They note that one of the difficulties in discussing ‘shared space’ is its lack of definition.  They suggest that term ‘shared space’ itself is unhelpful as it is too vague and is associated with many negative preconceptions.

They instead recommend the use of three different street types, which reflect the varying degrees to which pedestrians have freedom of movement across the entire space:

Evidence of safety and effectiveness

Another issue with shared space is that there is a fundamental lack of reliable evidence regarding its effectiveness and safety. A 2014 review found that “most of the evidence so far has been in the form of consultants’ reports, conference papers, student dissertations or reports for organisations which support or oppose aspects of shared space”.

Although some schemes have reported reductions in road accidents, campaigners raise concerns regarding the reliability of using traffic data to assess the safety of such schemes, arguing that reductions in accidents may be because vulnerable road users actively avoid a particular area.

In response to this lack of research, the CIHT review assessed 11 shared space schemes in England against five criteria:

It found that the majority of schemes appeared to have improved ease of movement and quality of place, but there was insufficient evidence to assess their impact in terms of creating an inclusive environment. They also found that the schemes had no significant impact upon safety, but acknowledge that some user groups had significant concerns about using the schemes.

Thus, while the CIHT conclude that shared space schemes do have the potential to improve public spaces, it cautions that “great care needs to be taken” when making decisions about “when to move from the pedestrian prioritised street type, where the driver should be seen as a guest, into the informal street type, where pedestrians will need to cross a defined carriageway”.

It calls for further guidance to help local authorities decide which type of street is most appropriate in any given situation, taking into consideration factors such as the number of pedestrians, traffic flow and speed.

It notes that “the key issues are around the use of kerbs and controlled crossings”.

In regard to kerbs, it states that “where conditions are such that the street needs to be separated into a carriageway and footway, the interface between them should be clearly delineated and detectable by all. In most situations, a kerb will be the most appropriate and simple way of achieving this”.

Regarding crossings, it states that “there should be sufficient provision for all users to cross the carriageway safely and in comfort”, and recommends further research into how best to achieve this.

A further recommendation of the review – that “future schemes should be promoted, designed, implemented and monitored against a series of predefined objectives with clear outcomes” – if implemented, will help to address the current lack of information on the outcomes and impact of these schemes, and inform future street design guidance and practice to the advantage of all users.

As the CIHT suggest “street design needs to meet the requirements of all users so that inclusive environments are created. This golden thread, enshrined in the requirements of the Equality Act 2010, must flow through the entire design, construction, operation and maintenance process”.

Want to learn more about shared space? Idox Information Service members can download our new briefing on shared streets via our customer website.

One thought on “Of kerbs, crossings and conceits: is this the end of the road for shared space?”