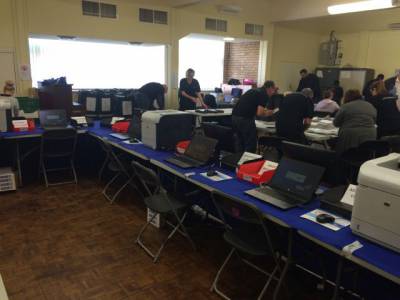 It was impossible to avoid: the UK held a General Election on 7 May 2015. Voting aside, the election experience was somewhat different for myself and a team of colleagues from across the company. This time, we joined the Idox Elections team for the period leading up the election in order to help deliver the company’s Postal Vote Management System (PVMS) in local authorities across the country.

PVMS is one of the key products delivered by Idox Elections. It works by comparing voters’ original Postal Vote Application (PVA) with the Postal Vote Statement (PVS) they complete at the same time as their ballot paper. The software compares the two forms using two unique identifiers: signature and date of birth. This ensures that the postal votes that go forward to the count on polling day are authentic.

Postal voting ‘on demand’ became possible for the first time at the 2000 General Election, following the implementation of the recommendations contained in the report of the Working Party on Electoral Procedures. The Working Group, chaired by then Minister of State at the Home Office George Howarth, recommended that:

The 2000 Act also made it possible for local authorities to apply for permission to trial new methods of voting for local elections, including all-postal voting. According to a review of these trials by the Local Government Association, all-postal voting was the “only new electoral arrangement to have significant potential for increasing local election turnout”.

Despite concerns over abuse of the system and fraud, the Electoral Commission maintains that there is no evidence of widespread and systematic abuse, and that it would not be ‘proportionate’ to scrap postal voting. There are many indications that postal voting has led to increased electoral turnouts, with the Post Office reporting that the number of postal votes issued increased by over 1.6 million between the General Elections in 2005 and 2010. Written evidence submitted to parliament by the Electoral Commission also highlighted that at the Police and Crime Commissioner Elections, where turnout was notoriously bad, postal votes accounted for 48.9% of the vote. During the Scottish Independence Referendum, some local authorities reported postal vote return rates of almost 90%.

Countdown to the election

For those of us new to the Elections team, work started the week beginning 27 April, almost two weeks before polling day. From the Monday, we started to arrive on-site to set up the system and meet the temporary staff employed to open and scan the PVS and ballot papers. The scale of this operation varied from one local authority to another: some of the smaller ones had 8,000 voting packs to get through before election day whereas sites like Glasgow (with an anticipated 66,000 packs) would sometimes process more than that in one day.

On the actual day of the election, work in Glasgow began at 6pm. This was due to the fact that postal votes can legally be handed into polling stations until 10pm – we had a long night of verifying votes ahead of us. In Glasgow, we had moved from the council building to the Emirates Arena for the count, where our work continued as media outlets from across the country prepared to report the events of the night ahead.

Of course, we didn’t let the pressure get to us and the last of the postal votes were safely delivered to the council to go forward to the overall count around midnight. While the days were sometimes long, I thoroughly enjoyed my ‘sabbatical’ from the Idox Information Service team and the chance to be involved in the delivery of something as important as democracy: roll on the Scottish Parliament elections in 2016!

Our recent white paper ‘Democracy and voting: key organisations and individuals‘ is an overview of who is influencing thinking in elections research.

Idox Elections is one of the premier election service providers in the UK, providing outstanding expertise and knowledge across all areas of election management.