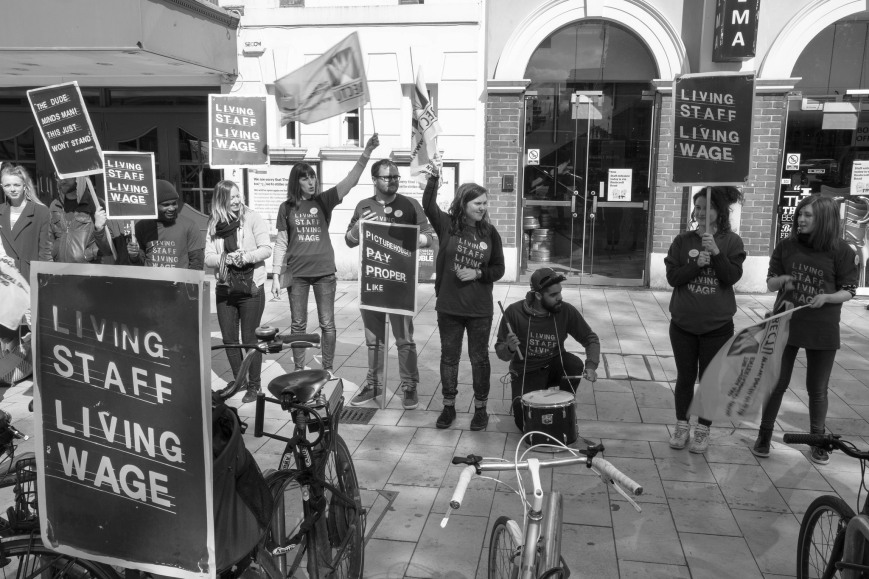 This week is Living Wage Week and the issue of workers struggling to make ends meet has been in the news again. Back on 23rd September 2014, I attended an event held by the Glasgow Centre for Population Health (GCPH) on the changing nature of work and in-work poverty in the UK, with a specific focus on Glasgow.

Over 100 delegates from across the public, private and voluntary sectors came together to learn about the latest research findings, take part in round table discussions and contribute to a panel debate on how to address the causes of in-work poverty. Speakers included experts on poverty from the Scottish Government, Glasgow City Council, Ipsos MORI, the Employment Research Institute at Napier University and the Glasgow Centre for Population Health.

She reported that, in Scotland in 2012/13 (the most recent data available), 16% of people, and one in five children, were living in poverty.

Jill noted that whilst employment was the best route out of poverty, it was no longer a safeguard against poverty as over half of all working age adults in poverty in Scotland were from households in which at least one person was in employment. Six in ten children in poverty were also from working households. Jill concluded that for poverty to decline, lower income households must have access to quality and sustainable employment.

The next speaker was Kevin Rush, Head of Economic Development at Glasgow City Council. Kevin provided an overview of the Glaswegian context of in-work poverty and the Council’s experience of implementing the Glasgow Living Wage (GLW).  The GLW, which was launched in 2009, set a guaranteed minimum hourly wage for all Glasgow City Council workers (£7 an hour in 2009, and now £7.65 an hour). It was also hoped that the GLW would have a knock-on effect on other employers in Glasgow, encouraging them to raise their own rates of pay and that of contracted staff. Kevin reported that the GLW had increased the basic salary of around 600 of the lowest paid Council workers by up to £1100 a year; the vast majority of whom were women.

However, he noted that the Council had faced a number of difficulties incentivising employers to sign up for the GLW scheme. He explained that although the council had sought to include the living wage as part of its procurement requirements, due to legal restrictions it remained a voluntary scheme, and by 2014 the number of participating employers had dropped to 130. Kevin concluded that the key challenges to be addressed were: properly incentivising employers to adopt the living wage; promoting good financial advice; and making childcare affordable.

The main issues facing those in in-work poverty were:

Dr Matthew Dutton from the Employment Research Institute at Napier University then spoke about his recent research which examined the impact of the living wage on employers and employees.

Matthew reported that studies of the London living wage had found a number of benefits for employers, including improvements in the recruitment and retention of staff, improved morale, motivation, productivity and firm reputation, as well as reduced levels of absenteeism and sick leave and enhanced quality of work from employees. He cautioned, however, that such findings were based on anecdotal evidence from a small sample of firms.

In Glasgow, it is estimated that around 18.3% (48,175) of people are paid less than the GLW hourly rate. The main reason employers gave for not implementing the GLW was the perceived negative impact on costs and competitiveness. However, Matthew’s research found that paying the GLW did not appear to have any significant effect on companies’ financial performance.

Another aspect of Matthew’s research was to model the relationship between income tax, benefits, tax-credits and wages in order to understand the effects of the GLW in the household. He found that in households where Working Tax Credits were an important source of household income (for example, a couple with 2 children, one of whom works full time and the other part time), then the payment of the GLW instead of the NMW could actually reduce household income by nearly £670 per year, as the increased income from employment reduces household income from WTC and increases the amount of tax paid.

He therefore concluded that while a living wage could improve incomes for some household types, on its own it was not be enough to bring about real change for the poorest households (i.e. those where earned income represents a small proportion of total income).

The final speaker of the day was James Egan from Glasgow Centre for Population Health, who discussed the changing nature of work within the voluntary sector in Glasgow and provided an overview of the findings of the GCPH report “The rise of in-work poverty and the changing nature of poverty and work in Scotland: what are the implications for population health?”. James reported that low-quality, precarious and insecure work was found to have a detrimental impact on mental health and wellbeing. He noted that there was evidence to suggest that being employed in the lowest quality jobs was actually more damaging to mental health than remaining unemployed.

The day finished with round table discussions which produced a series of questions for the panel to debate. The key issues that emerged were the way in which the public sector could use procurement to encourage employers to pay a living wage to their employees. There was some uncertainty regarding the legality of requiring public sector contractors to pay the living wage, as it may breach current EU legislation. It was suggested by some that perhaps the boundaries of such legislation should be tested by ‘pioneering’ councils. The panel also discussed the various ways in which the private sector could be incentivised to pay a living wage, and it was noted that this was an area of particular difficulty.

I came away from the day feeling generally positive – while there are clearly many challenges to address, it was encouraging to see so many dedicated, passionate people sharing their knowledge and experience, and working together to find solutions.

If you would like more information on in-work poverty, the Idox Information Service has collated an extensive collection of relevant journal articles, policy papers and research. A selection of key documents is highlighted below:

Smith Institute (2014) Outsourcing the cuts: pay and employment effects of contracting out (Ref. B39500)

Living Wage Commission (2014) Working for poverty: the scale of the problem of low pay and working poverty in the UK (Ref. B36016)

Centre for Economic and Social Inclusion (CESI) (2013) Work in progress: low pay and progression in London and the UK (Ref. B36566)

Glasgow Centre for Population Health (GCPH) (2013) The rise of in-work poverty and the changing nature of poverty and work in Scotland: what are the implications for population health? (Ref. B34134)

2 thoughts on “Addressing the causes of in-work poverty”