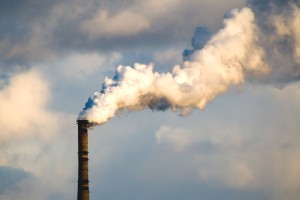 The World Health Organization (WHO) has today released air quality data for 1600 world cities across 91 countries. In the press release accompanying the data release WHO explained that:

What can be done?

WHO suggests that to improve air quality policy measures must be taken. These include banning the use of coal for space heating in buildings, using renewable or ‘clean’ sources for electricity production and improving the efficiency of motor vehicle engines.

Air quality in this instance is represented by annual mean concentrations of fine particulate matter (PM10 and PM2.5, i.e. particles smaller than 10 or 2.5 microns). Air quality measurements describe PM concentrations through micrograms per cubic meter (ug/m3). Particulates of 10 microns or fewer are the most dangerous as they can penetrate and lodge within lungs heightening the risk of developing cardiovascular and respiratory diseases and lung cancer.

The place with the highest levels of PM 2.5 in the UK is the coastal town of Eastbourne in East Sussex. Other places with higher than the UK average levels include Birmingham, Leeds, London, Portsmouth, Sheffield and Stoke-on-Trent. It should be noted that London’s levels are an average based on three monitoring stations.

The UK average for PM 10 stands at 21 ug/m3 which is close to the WHO recommended level of 20 ug/m3. Areas beneath the UK average and WHO recommended levels include Aberdeen, Edinburgh, Glasgow, Liverpool, Leicester and Oxford. Those above include Birmingham, Chesterfield, Leeds, London and Sheffield. Thurrock and Nottingham have the highest levels of PM 10 in the UK at 25 ug/m3. 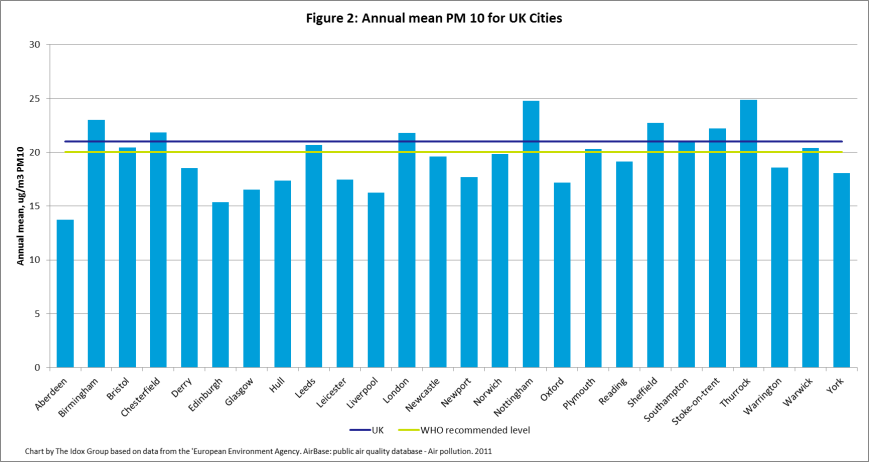 Compared to other Western countries with similar socio-economic status (defined as high income countries by WHO) UK cities perform well on the whole as shown in Figure 3. London has lower PM 2.5 levels than Paris, Rome, and Berlin. Madrid and Dublin by comparison have lower levels (although they are much smaller cities). 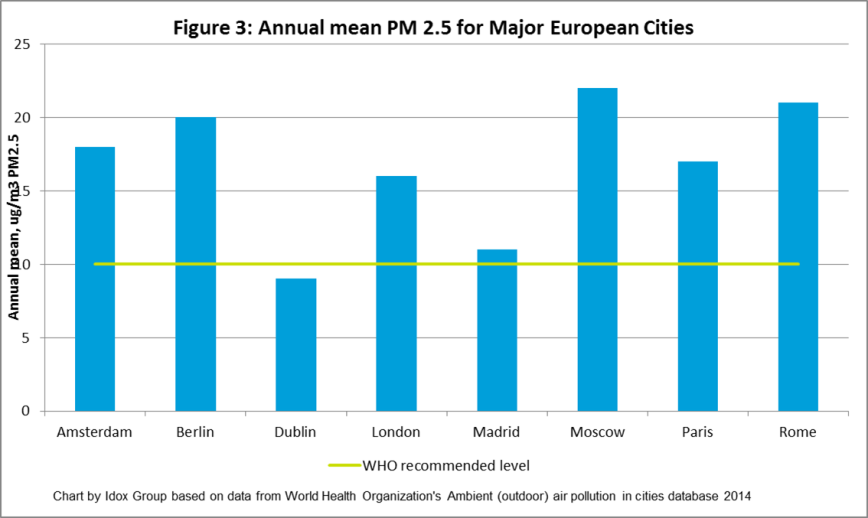