“The most important factor in improving participation is persuading voters that the election (and the political process more generally) is relevant to them and that their vote matters. That is the responsibility of politicians – of all parties, and at all levels of governance – and, arguably, the media.” The Electoral Commission

Disengagement with mainstream politics, particularly among young people, is a common concern among politicians.  But in an age of all things digital, and with the growth of social media platforms such as Twitter and Facebook, there are undoubtedly more ways than ever to engage people with politics.

It seems that traditional election campaigns of door-to-door canvassing, local meetings and incessant letter box mailings are being surpassed by a new age of digital campaigning, with hashtags, retweets and ‘likes’ all a familiar occurrence.

But with a little over two weeks until voters across the UK go to the polls, has the electorate become more engaged?

Low voter turnout has been an increasing concern in the UK. Last year’s general election saw a 66.1% turnout – the largest in 18 years. However, this was still significantly lower than the highest ever turnout at a general election in 1950, which reached 83.9%.

It has been even worse for local and European elections, and during the first Police and Crime Commissioners election in 2012, turnout was just 15% – the lowest recorded level of participation in a peacetime non-local government election in the UK.

As our previous blog on voter engagement highlighted, the latest government figures show there has also been a drop in the number of registered voters.

A general mistrust of politicians and the centralised model of governance in the UK is also apparent. And this is particularly the case among young people. Findings from the Citizenship Education Longitudinal Study showed that 80% of young adults reported very low levels of trust in politicians in the run up to the 2015 general election.

Despite this, a majority of young adults said they were either ‘very likely’ or ‘fairly likely’ to vote in the election and many were engaging in some kind of political activity – nearly 90% were members of a social networking site, and over half this group used social media to engage with political or civic material.

According to a recent report that examined the relationship between the media and the electorate in the 2015 general election, “engagement with young voters worked best where media brands met them on their own ‘turf’ – online, on social media, and particularly on Facebook”.

A recent report from the Design Commission argues that social media networks, such as Facebook and Twitter, can dramatically reduce the perceived ‘barrier’ between the electorate and political decision-makers.

It points to the unprecedented voter turnout witnessed during the Scottish referendum (84% – last seen in the UK in the 1950’s) and notes that whilst it was a generation-defining decision, “it can be argued that effective social media usage engaged the populace in conversation and debate and encouraged democratic participation, especially in younger age groups”. The referendum generated 10 million interactions and there were more than 4 million tweets on the topic between August 1st and September 8th.

Similarly, a study of 16-19 year-olds who voted for the first time in the Scottish referendum highlighted that social media were generally useful tools for political communication and engagement, particularly amongst the younger generations. Reasons cited, included:

An Ipsos Mori poll also found that a majority of Britons believe social media gives people a voice who would not normally take part in political debate and is breaking down the barriers between the electorate and politicians. And, again, it highlighted that social media has the potential to have an even greater impact on 18-24 year olds, a third of whom think social media will influence their vote.

While many believe social media is a tool of empowerment and transparency, others argue that it does not help the political process by improving people’s understanding of political parties, or the issues, but rather leads to a ‘a trivialization of the electoral process’.

Ipsos Mori’s study found that people also recognised the disadvantages of social media, with most believing it is making debate more divisive and superficial.

It could be argued that inflammatory comments made on social media could stir up hostility and lead to aggravated debates, thereby detracting from serious political debate. Or that the use of slang can lead to confusion and ambiguity, potentially contributing to a lack of meaningful discussion.

There is also the issue of space constraints with some social media, such as the 140 character limit for Twitter, which can make it even more difficult for arguments to be conveyed in the way intended. And the accuracy of information provided should also be considered.

Nevertheless, it is clear that social media does play a role in engaging people who may otherwise not participate in political debate.

However, what isn’t clear, as concluded by the report on the 2015 general election, is that “despite the millions of tweets, retweets, posts, likes, shares, and views, there is no evidence that social media played a decisive role either in boosting engagement and turnout, or in the election result.”

That is not to say that social media won’t play this role in future elections, if its growth continues and if those of the digital generation move into key political and media roles – #GE2020?

If you enjoyed reading this, you may also be interested in our previous blogs:

Idox Elections is one of the premier election service providers in the UK, providing expertise and knowledge across all areas of election management. 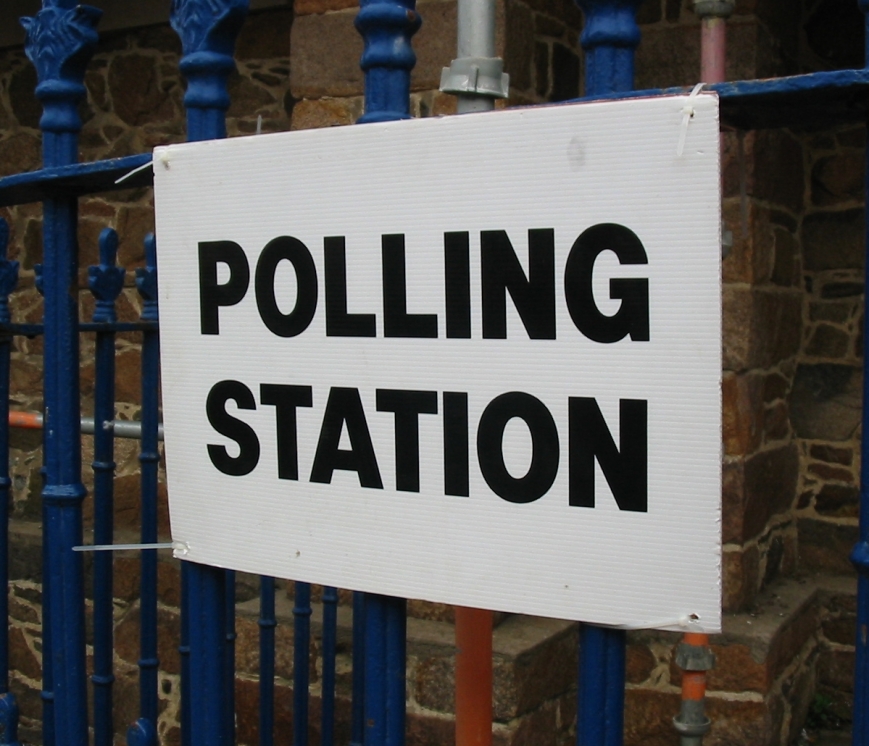 Image: Man_vyi via Wikimedia Commons under a Creative Commons Licence

It will be interesting this year to see whether turnout continues to recover, perhaps to over 70% as suggested by some, or resumes a downward trend since 1950. 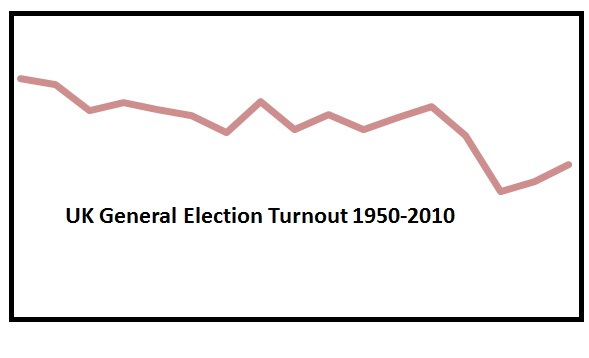 The Scottish Independence referendum, which had a turnout of 84.5%, perhaps gives hope that people can still be engaged in politics, when they feel that issues are important to them and affect their lives. The referendum also highlighted the role of social networks, social media and technology in political engagement, particularly for young people.

In November 2014, our blog by James Carson looked at the rise of voter advice applications (VAAs), which pose a series of questions about election issues and uses the results to advise the user on which party is most closely aligned to their views. Since then these applications have proliferated in the UK, as shown by a list on the mySociety blog, which initially (20 March) identified six such apps, and to-date added a further thirteen!

There are concerns about potential negative aspects of such sites, for example that the ‘advice’ generated is dependent on a series of methodological choices made by the creators. But they do seem to engage and encourage people to vote. A study in the Netherlands estimated that that VAA usage accounted for about four per cent of the reported turnout in the election, and that it particularly affected groups typically less likely to vote, such as young voters and those less knowledgeable about politics.

A study of the impact of VAAs on actual voting behaviour indicated that “the patterns of usage and impact appear to cancel each other out, in that those who most frequently use VAAs are least likely to be affected by their vote advice”. Perhaps that is not such a bad thing? Users become engaged in the issues involved, but still make up their own mind.

And engagement in the political process is not just a ‘good thing’ for democracy. For those more interested in the ‘bottom line’, and what politician isn’t in this time of austerity, recent research has suggested that, at the local level at least increased public participation in the process of public decision making increased tax revenues.

Of course many issues affect turnout levels and VAAs can only play a small role. ‘The weather!’ it is often said, is the deciding factor – if it rains turnout will be low, sunshine and it will be high. The current long range forecast for 7 May is fine and 17C in the south of England, heavy showers and 13C in Scotland. But be wary of reading too much into that – evidence suggests that in the UK at least the link between weather and electoral turnout is an urban myth!

The Idox Information Service can give you access to a wealth of further information on democracy and voting, to find out more on how to become a member, contact us.

Our recent white paper ‘Democracy and voting: key organisations and individuals‘ is an overview of who is influencing thinking in elections research.

A week ago I was invited to a private view of “Election! Britain Votes” – a bold and experimental new exhibition developed by the People’s History Museum in Manchester as we prepare to go to the polling station. Having read the recent review by New Statesman, where the exhibition is described as “candid and sincere… far removed from the complacency we often get when museums try and do politics”, I was looking forward to visiting one of my favourite museums.

As a big supporter of democracy and people having the right to actively participate in the decisions which rule our lives, I couldn’t help but wonder at the number of attendees (it was a ‘good turn-out’) and whether the innovation and impact of the exhibition will ever reach the people it needs to, the disaffected voters.

Opened by Jon Snow, he made some interesting opening statements –  his enthusiasm for the exhibition was obvious but he highlighted some key issues we face as a democracy:

The exhibition is pitched as a place to debate, discuss and reflect on the importance of our vote in 2015. Through the most amazing and immersive infographics I have seen (created by @AJGardnerDesign) the exhibition takes you through the history of voting; the mechanics of it and what goes on behind the scenes.

It lays down the gauntlet to Russell Brand by answering the question “voting: what’s the point?” and finishes with a terminal which allows you to register online to vote. The visitor is challenged not to, having witnessed the struggle others went through to enable you to have the right!

Having visited, the prevailing memory of the exhibition is summed up in the title of this blog – we take for granted the privileges we have as a result of living in a democracy. Taking it for granted means we risk losing its benefits:

As Jon Snow said, the exhibition shows us “how we got to where we are… but we don’t know where we will be”. But one thing was very obvious from the voter turnout figures presented – fewer and fewer people are exercising their right to shape what we will be, as a country and community. The voting population is disillusioned and feels excluded from the decision making; and political parties, individual politicians and the government should take action to re-engage the electorate.

If you are wondering why you should vote, I would highly recommend a visit!

We have previously blogged on voting and democracy:

Other resources which you may find interesting (some may only be available to Idox Information Service members):

A programme for effective government: what the party manifestos must address in 2015

Civic participation and political trust: the impact of compulsory voting

Voter engagement in the UK: fourth report of session 2014/15