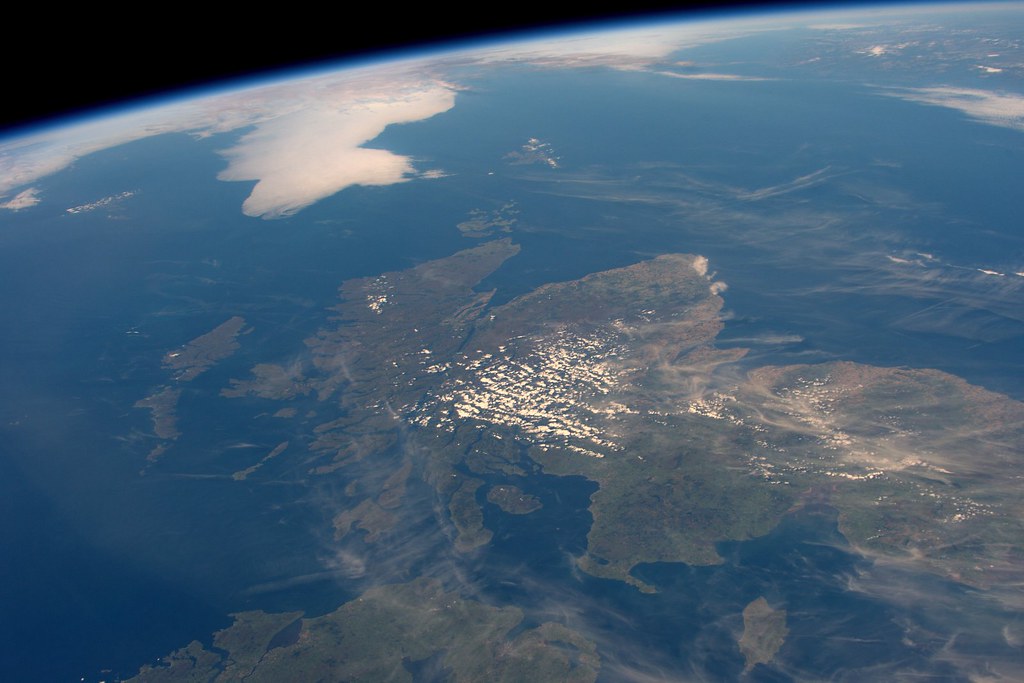 “Nearly Cloudless Scotland, As Seen From the ISS” by NASA’s Marshall Space Flight Center is licensed under CC BY-NC 2.0

It may come as a surprise to learn that Scotland is on its way to becoming a space industry superpower. The country is home to over 130 space businesses, with a combined annual income of £140m. Glasgow is building more satellites than any other city outside Houston.

Tom explained that Scotland’s increasing involvement in the space sector is part of a wider growth in the ‘space-for-earth’ economy, which includes telecommunications and internet infrastructure, earth observation capabilities and national security satellites.

Falling costs for building and launching spacecrafts have attracted greater investment in the commercial space industry. Space hardware is cheaper because it has become much smaller – these days, a miniature satellite (or ‘cubesat’) is typically about the size of a shoebox.

In recent years, the number and range of applications relying on satellite technology has rocketed. From smartphones and GPS devices to broadband access for developing nations, demand for space-based infrastructure has never been greater.

Data is another important driving force behind the new space economy. Scientists and governments need reliable data in order to understand how our planet is changing, and satellites can be used to take vital measurements of things like ice thickness coverage, deforestation, and ocean surface temperatures.

Cubesats are also used for monitoring shipping lanes, keeping a record of crop yields, and for protecting communities. Tom gave an example of an Australian company which uses satellite data for the early detection of wildfires, enabling emergency services to respond before lives and properties are put at risk.

Scotland is well placed to make the most of the booming space economy. According to Scottish Development International, operating costs for space companies are 40% lower in Scotland than elsewhere in the UK.

Another of the webinar participants, Professor Marion Scott from the department of mathematics at the University of Glasgow, highlighted the importance of Scotland’s skilled workforce. Nearly 20% of  all UK space roles are filled by Scotland’s 7,500 person strong talent pool. And Scottish universities have been quick to fill the gaps in different sectors by providing new courses, training and collaboration.

Meanwhile, Phil Cooper, AWS’ regional manager for Europe, the Middle East and Africa, pointed to the burgeoning reputation of companies in the Scottish space sector. AAC Clyde Space, for example, has become a market leader in providing spacecraft design, satellite operations and data delivery to governments, businesses and educational organisations.

But Scotland’s space boom is far from over. Phil forecasts that another 30 start-ups could be up and running by this time next year.

Another exciting prospect is the arrival of vertical launch capabilities. Five space hubs are currently under development around Scotland, and last year a site in Sutherland received planning permission from Highland Council to develop the UK’s first space port. By next year, it’s hoped that the vertical launch pad near Melness will send its first satellite into space.

While there are lots of positives associated with the space economy, it’s not all good news. There are currently almost 7000 satellites orbiting the Earth, and the US National Oceanic Atmospheric Administration (NOAA) says that figure could double in 2021. As space becomes more congested, the problem of debris from old spacecraft and satellites has grown.

Tom Soderstrom highlighted research by Fujitsu, in collaboration with Astroscale, the University of Glasgow and AWS, to develop a proof of value to make space debris removal missions more commercially viable using its open innovation technology. The UK government has provided funds for this and other projects aiming to track space junk and monitor the risks of potentially dangerous collisions with satellites or even the International Space Station.

Environmental issues will be dominating the headlines later this year, when Glasgow plays host to the critical United Nations Climate Change Conference (COP26). One of the questions raised at last month’s webinar was how Scotland’s space sector can address the Earth’s climate challenges.

Marion Scott explained that there is now a network of universities and research centres working together to consider some of the climate challenges in advance of the COP26 meeting. At the same time, Marion stressed the importance of earth observation data in helping assess the scale of the problem of climate change.

Phil Cooper agreed that data was vital, and highlighted a competition launched by the Satellite Applications Catapult and the Commonwealth Secretariat in April which aims to stimulate discussion around the development of new concepts relating to ocean sustainability, incorporating satellite data and technologies.

The only way is up: the future of the space economy

In 2019, the World Economic Forum reported that while heavyweights like the United States, China and Russia have the greatest number of satellites in orbit, more and more nations – including the UK, Canada, Germany, Argentina and Luxembourg – have been developing their own space programmes. The Economist recently highlighted the growing number of African countries joining the commercial space race – last month the tiny Indian Ocean island of Mauritius became the latest country to launch its first satellite.

At the conclusion of the webinar, Phil Cooper expressed great optimism about the future of the space-to-earth sector, which can involve not only scientists, but people working in manufacturing, digital, marketing and many other industries. And, as Tom Soderstrom observed, the opportunities being generated by the new space economy are almost unlimited:

“The space bubble will grow faster than even I can imagine!”