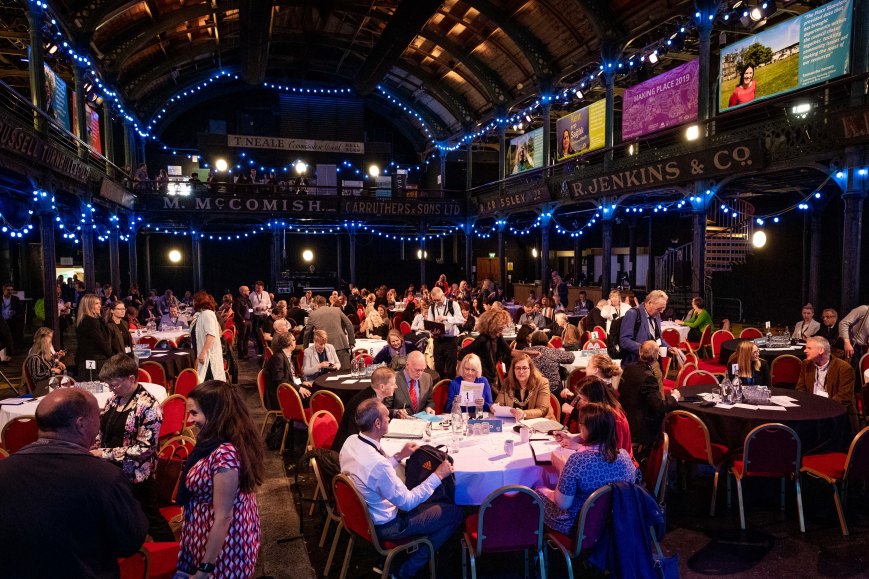 There is now a growing body of evidence to indicate that our physical environment – the places where we live, work and socialise – affects our health and wellbeing and contributes to creating or reducing inequalities. But even without the research, it’s plain to see how a neighbourhood with lots of facilities for pedestrians and cyclists, a choice of shops and good public transport connections could benefit health in ways that one with an excess of pubs, fast food shops and car traffic would not.

The importance of place-based approaches to improving health and reducing inequalities was the theme of an international conference held in Glasgow last week.

The venue for the conference – Glasgow’s Old Fruitmarket building – is a shining example of how a great place can be repurposed and reinvented. Originally a wholesale fruit market, the building has been reborn as a unique setting for cultural and business events, but has retained many of its original features, including a lofty vaulted roof and a cast iron balcony.

Facing up to the challenge of place

In his introduction, David Crichton, Chair of NHS Scotland, pointed to the sobering statistics that throw the importance of place into sharp focus. He noted that while the health of Scotland’s population was generally improving, people living in 10% of the country’s poorest areas are four times more likely to die prematurely than those in more prosperous places. The city of Glasgow knows all too well about these stark health inequities. A person living in the deprived area of Calton has an average life expectancy of 54 years, while someone growing up in affluent Lenzie, just 12km away can expect to live to 82. Aileen Campbell, the Scottish Government’s Cabinet Secretary for Communities and Local Government, highlighted projects such as Clyde Gateway in Glasgow and the Bellsbank Initiative in East Ayrshire as successful examples of placemaking. Their success, said the minister, lies in focusing on what’s important to the people and communities of these areas, with the support of government and local authorities.

This international conference also heard from Monika Kosinska from the World Health Organisation, who noted that the problems facing Scotland are not unique. Around the world, countries and communities are experiencing the challenges associated with ageing populations and health inequalities. In this sense, she observed, all countries are developing countries.

A sense of coherence

The World Health Organisation’s assertion that health is a complete state of wellbeing, not merely the absence of disease, was at the heart of a powerful presentation delivered by Sir Harry Burns, Director of Global Public Health at the University of Strathclyde.

His research has underlined that poverty is not the result of bad choices. The real problem is that, without a sense of coherence and purpose, people are not in a position to make good choices.

As Sir Harry explained, a child experiencing chaotic early years (featuring parental substance abuse and/or domestic violence) is already on a path to mental health problems which can culminate in a loss of control and long periods of worklessness and poverty. But the implications can be even more serious: “The more adverse experiences you have as a child, the more likely you are to have a heart attack.”

A eureka moment for Sir Harry Burns occurred when he read a book by an American sociologist. Aaron Antonovsky spent the latter half of his career in Israel studying adults who as children had been in concentration camps. He found that the children who survived had developed what he termed a “sense of coherence” – a feeling of confidence that one has the internal resources to meet the challenges of life, and that these challenges are worth engaging with.

That sense of coherence, Sir Harry believes, lies in giving people in poverty greater control over their own resources: “People who have a sense of purpose, control and self esteem are more positive and secure about the places they live in, and a greater ability to make the right choices.”

He concluded that rather than being passive recipients of services, all of us have to be given the opportunity to become active agents in our own lives: “‘Ask people to take control of their lives, build their trust, and people can make choices that support their health. We must create places that do that’. 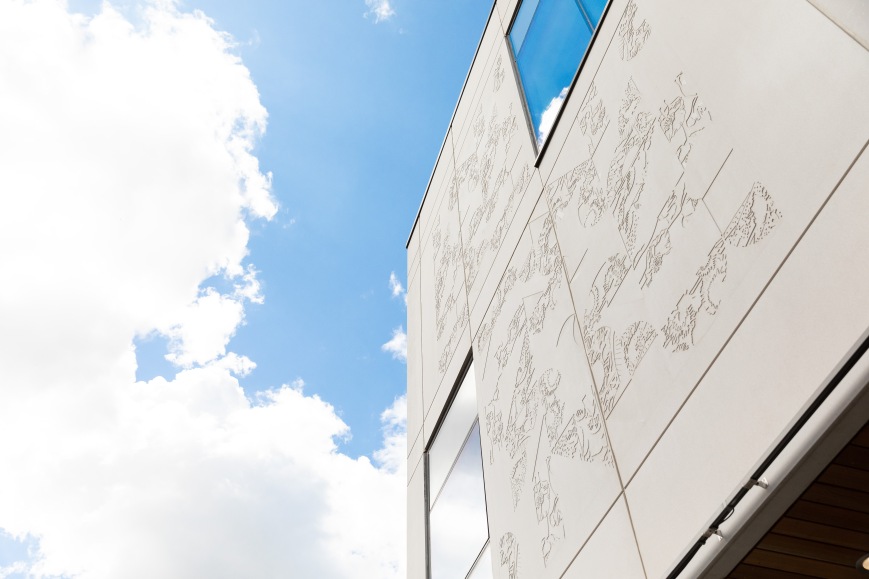 This theme of active engagement in placemaking was demonstrated during a site visit to a new health centre in Woodside, one of the most deprived parts of Glasgow. The aim of the new health centre is to reshape health services from the patient’s point of view, helping them to manage their own health and improve the care they receive. The new centre will bring together GP services, along with dental, pharmacy and physiotherapy services.

The health centre and its surroundings have been created by engaging with the local community. Using ideas from local people, the exterior of the building features designs reflecting the natural and industrial history of the area. Natural light from large windows in the roof floods the centre of the interior, giving a sense of brightness and tranquility, while wooden slats feature designs linking the centre with natural features nearby.

That connection with the natural environment will be reinforced with the development of a community green space close to the new health centre. The Forth and Clyde Canal is just a few minutes’ walk from the health centre, and a new foot and cycle bridge linking the centre to the local nature reserve is under construction. Other features will include new and improved pathways and new wildlife habitats. The natural space is already attracting walkers, joggers, families and cyclists, and local people report feeling they can now visit this area in greater safety than ever before.

One of the threads running through this conference was the Place Standard, a practical tool developed in Scotland to help communities assess and redesign their own places.

For the final session of the afternoon, round-the-world cyclist Mark Beaumont introduced members of the Glasgow Disability Alliance (GDA) who shared results from their day as the Place Making Team using The Place Standard Tool. The results highlighted some of the elements of place that are important to people with disabilities – but also to others: lack of accessible toilets, poor transport links, networking events with no seating, inaccessible information, no social care support.

This conference provided some important ideas on what’s wrong with our places, and some examples of places that are getting it right. And even for those that are on the right track, everyone was left with a clear message: when it comes to placemaking, good enough is not enough! The theme of this year’s conference posed a question to speakers and delegates of the conference: is the current planning climate in Scotland presenting “new opportunities, or more of the same?”

Delegates came together in the COSLA building in Edinburgh to discuss all areas of planning and environmental law in Scotland. The gathering included a range of organisations and sectors, including lawyers and solicitors, planners, engineers, academics and civil servants.

The morning session focused on energy, infrastructure and economic development. Ross Martin (@SCDIChief), chief executive of the Scottish Council for Development and Industry kicked the day off with a discussion of place making in Scotland. He highlighted the economic benefit of good planning, noting that when it is done well planning has a core role in economic development strategies and can facilitate growth within an area.

This was followed by a discussion from Professor Becky Lunn from the University of Strathclyde who gave delegates some interesting food for thought in her discussion of the environmental, economic and moral consequences of Scotland’s energy choices.  A day after Ineos imported its first container of US shale gas to its Grangemouth refinery, Professor Lunn told delegates, that no energy solution is problem free, but “if we (Scotland) say no to the domestic production of gas and nuclear energy we are saying yes to something else”- the demand needs to be met regardless of whether the energy is produced in the UK or not. She questioned the moral arguments that it could be acceptable to import shale from elsewhere, while we are not content enough with the level of safety, the security of regulation and its wider environmental impact to do it ourselves (something which was picked up on by Ruth Davidson later that same day in FMQ’s). Professor Lunn advocated a strong public element to discussion, and a robust and well-informed debate around long term energy choices. She also warned against “crisis led” energy policy-making dictated by rhetoric of “fear and shortage”.

Head of planning at Homes for Scotland, Tammy Adams (@TammyHFS) discussed the delivery of high quality homes in Scotland within the wider planning context. She highlighted the challenges and opportunities for house building, arguing that delivering new homes in Scotland should be “a golden thread” running through the Scottish planning system, and that an effort should be made to better align market realities and site strategy, but maintain flexibility of delivery.

The penultimate session of the morning was delivered by Sara Thiam, director of the Institution of Civil Engineers Scotland. She looked at the role of infrastructure and planning. Sara discussed the potential of devolution to city regions to grow the economy by allowing city regions to plan and build infrastructure which reflects their local social and economic needs. She also spoke about the need to be strategic about infrastructure choices, not just pushing increased finance for infrastructure, but targeting it strategically, investing in green infrastructure where possible, and thinking long-term about projects and desired outcomes.

The morning was brought to a close by event sponsors Terra Firma Chambers who provided some useful insights into  up-to-date case law, including notable cases that many delegates could draw on for their day to day decision making and planning submissions.

The afternoon session opened with a panel session which featured insights from four speakers: Greg Lloyd, Emeritus Professor of Urban Planning at Ulster University; Craig McLaren, RTPI Director of Scotland and Ireland; John McNairney, Chief Planner at the Scottish Government; and John Hamilton, CEO Winchburgh. The discussions focussed on the new opportunities presented in planning in Scotland, including the review of planning, building homes, creating more joined up planning and the planning process more generally. Discussions were wide ranging, generating a lot of interaction both within the panel and between the panel and the delegates. The discussions were wrapped up by a second case law update.

The final presentation of the day was delivered by Steve Rogers, Head of Planning and Regulatory Services at Dumfries and Galloway Council and Chair of Heads of Planning Scotland. He spoke about his experiences with smart resourcing and the importance of leadership in planning.

Overall it was a day full of insight and expertise, which provided everyone who attended with the opportunity to think critically about the state of planning in Scotland from a number of different positions. It posed questions to be considered, allowed delegates to reflect on their day to day practice and highlighted opportunities and potential barriers for planning in Scotland in the future.

An annual subscription to SPEL Journal is £145. For further details or a sample copy, please contact Christine Eccleson, SPEL Journal’s Advertising Manager, on 0141 574 1905 or email christine.eccleson@Idoxgroup.com

SPEL Journal is read by decision makers in Scottish planning authorities, planning law practices, planning consultancies, surveyors, civil engineers, environmental managers and developers across Scotland. It is also valued by many practitioners outside of Scotland who need to keep abreast of developments. 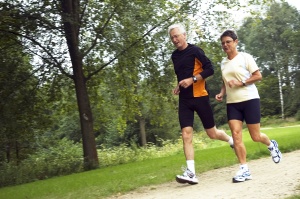 “If 75 % of people failing to exercise enough across the country did meet recommended levels of walking, £675 million could be saved each year”. RIBA

Section 12 of the Health and Social Care Act 2012 has given local authorities in England responsibility to improve the health and wellbeing of local people. END_OF_DOCUMENT_TOKEN_TO_BE_REPLACED