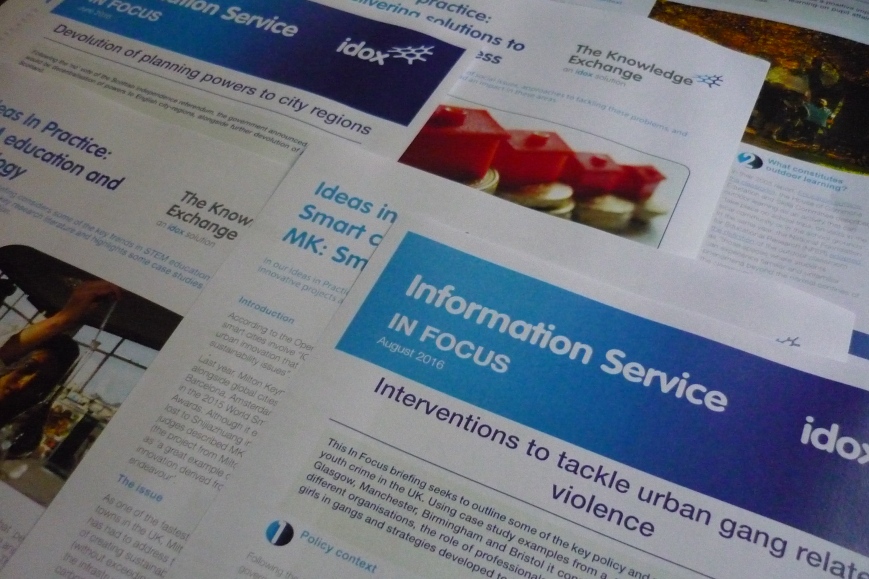 So far this year, our team of Research Officers in The Knowledge Exchange have researched and written more than 30 policy and research briefings on a diverse range of subjects, from housing and planning to technology and training. Written in a clear and concise style, each briefing brings together examples of recently published evidence, alerts readers to new and continuing developments and signposts sources of further information. New briefings are available exclusively to members of our Information Service, and the choice of topics is driven by what our members are asking us about.

Today’s blog post offers a flavour of just some of the topics we’ve been covering during the year.

In many parts of the UK, people are struggling to buy or rent affordable housing. One consequence is a rise in homelessness. Our briefing – Delivering solutions to tackle homelessness – describes the complexities involved in defining homelessness, and the subsequent difficulties in measuring the scale of the problem. The causes of homelessness are no less complex, and the briefing lists some of the factors that lead to people finding themselves on the street, such as eviction, unemployment, health problems and relationship breakdowns. It also highlights approaches to tackling homelessness, such as social impact bonds and homeless health peer advocacy.

Closely related to housing is the role of planning in ensuring that individuals and families not only have adequate homes, but the infrastructure and services needed to support communities. One of the significant developments in this area has been the UK government’s policy on devolving more powers (including planning) to England’s cities and regions. Our briefing – Devolution of planning powers to city-regions – explains that each devolution deal agreed between the UK government and local authorities is tailored to the local area. In the West Midlands, for example, a directly-elected mayor will be given planning powers to drive housing delivery and improvements.

The briefing notes that, while there is widespread agreement that devolution of planning powers to local areas is a positive step, there is also concern that local areas won’t be able to deliver what they need to in terms of planning without control of expenditure, much of which is still retained by central government.

Our “Ideas in Practice” series of briefings presents case studies of projects and initiatives that have tackled a range of social issues, often resulting in reduced costs or improved efficiency. Our smart cities briefing on MK: Smart outlines a technology-led urban innovation project in Milton Keynes that aims to improve the town’s key infrastructure in areas such as transport, energy, and water. One of MK:Smart’s success stories is its Smart Parking initiative, which has encouraged drivers to use limited parking spaces more effectively, as well as providing the council with a better understanding of parking behaviour.

Another technology-focused briefing looks at the increasing development of “serious games” in the domains of planning, education, health and cultural heritage. Serious games in the policy field have borrowed elements from the video games sector, such as virtual reality, simulations and digital game-based learning. As well as improving skills and engagement among individuals, serious games have been used as a powerful way of introducing new concepts to the public, and providing people with an understanding of different points of view. The briefing showcases some examples of the application of serious games, including ‘B3— Design your Marketplace!’ which created an immersive and playful environment to encourage citizens to give their views on the design of a marketplace in Billstedt, a district of Hamburg.

A number of our briefings this year have focused on the all-important areas of education, training and skills. The Ideas in Practice briefing on science, technology, engineering and maths (STEM) education considers key trends and practical applications. Among the initiatives highlighted in the briefing is Third Space Learning, which connects primary schools in England and Wales with maths specialists via one-to-one online sessions.

In August, we published a briefing focusing on the impact of outdoor learning on educational attainment. It includes information on the implementation of the Forest School initiative in the UK, which places emphasis on children having contact with nature from an early age. The briefing highlights evidence that pupils with the highest connection to nature have been found to perform better in exams, and notes the positive impact on the attainment of those from deprived backgrounds.

Our briefing on urban gang crime highlights some of the ways that local authorities and organisations have sought to tackle the problem. One of the case studies focused on the exploitation of young women by gangs in Manchester. Delivered by women who have survived gang exploitation, it provides one-to-one support, allowing both mentors and victims to create lasting relationships and networks of support which help them as they transition from life within a gang. In 2013, the project won the Women in Housing award for best community/ training project for its work in rebuilding women’s lives.

This is just a taster of the variety of subjects addressed in The Knowledge Exchange’s policy and research briefings. A fuller list of briefings is provided here, and members of the Idox Information Service can keep up-to-date with newly-published briefings via our weekly Bulletin.