Britain’s bosses have been urged by the government to prepare early for the introduction of the National Living Wage (NLW) in April next year.

This push coincides with a new poll revealing that 93% of bosses support the Living Wage initiative, with a majority believing it will boost productivity and retain staff.

This is supported by new research by the University of Strathclyde and the Living Wage Foundation (LWF), which uses real-life case studies and evidence from employees working for accredited Living Wage employers. It suggests that paying staff a living wage leads to many business benefits – such as staff retention, more efficient business processes, improved absenteeism and better staff performance.

Many of the findings highlighted relate to research on the London Living Wage (LLW). Among these include:

Estimates show that 4.5 million employees will see a rise in their wages as a result of the introduction of the NLW in 2016, with a further 2.6 million gaining from spillovers. By 2020, 6 million employees are predicted to have received a pay increase.

Up to one in four workers are expected to experience a significant positive impact from the NLW. If the result is indeed a happier workforce, perhaps the knock-on effect for businesses will be improved productivity.

There will however be variation across different parts of the UK and across different households, depending on how the NLW interacts with the tax and benefit system (it should be noted that many estimates were made prior to the u-turn on welfare reform). And let’s not forget that the NLW is not for all as under-25s will not be eligible.

The impact on employees and therefore employment generally, will also depend on the actions firms take to prepare for the NLW in order to mitigate costs.

Indeed, the research from Strathclyde and LWF recognises that implementing the NLW will inevitably involve initial costs to businesses and could represent an issue for some companies more than others.

According to the Federation for Small Businesses, a negative impact on business is expected by 38% of small employers, with many expected to slow their hiring and raise prices.

It has been estimated that the NLW may lead to an increase in the unemployment rate by 0.2% points in 2020; resulting in around 60,000 more people unemployed and total hours worked per week across the economy around 4 million lower.

Businesses may also look to employ those under the age of 25 who won’t be eligible for the NLW. This could particularly impact on those sectors with a high proportion of lower paid employees, such as social care – a sector that is already under financial pressure.

The roll out of the Living Wage has certainly raised concern over potential costs for councils, which are having to deal with increasing budget cuts. The Local Government Association (LGA) has estimated that the NLW could cost local authorities £1bn a year by 2020/21.

So while increasing wages for low paid workers may seem like a no-brainer in the bid to help reduce in-work poverty, the full impact on employees, employers and therefore the economy, remains uncertain. Only time will tell what the true impact of the NLW will be.

Further reading: if you liked this blog post, you might also want to read our previous blog on the Living Wage.

Last week, Church of England bishops issued a letter calling for a new direction that they believe political life in the UK ought to take. Among the bishops’ recommendations was support for the living wage:

“It represents the basic principle that people are not commodities and that their lives cannot adapt infinitely in response to market pressures.”

It didn’t take long for the media to find flaws in the Church’s own approach to paying its staff. This week it was reported that a Church job in Canterbury was being advertised at £6.70 per hour. The living wage, calculated from the basic cost of UK life, is currently £7.85 an hour outside London.

Low pay seems likely to be one of the key issues in the general election campaign, so a new report from the Joseph Rowntree Foundation (JRF) is especially timely.

The report describes low pay as “endemic” in the UK labour market, noting that more than one in five workers in the UK experience low pay, a proportion that has changed little in more than 25 years.

Among the research findings:

The authors of the report express concern that when many of those workless individuals who were formerly low paid return to employment, it is to a similarly low level of earnings.

“This low-pay, no-pay cycle means many find it difficult to escape low living standards and advance in the world of work.”

In addition, the JRF report highlights  the significant burden on the state of having large numbers of low-paid workers alternating between employment and worklessness, and suggests that significant fiscal savings could be made if job security for those in low-paid positions was strengthened.

While the paper does not propose any specific policy recommendations to tackle the employment insecurity of low-paid work, the authors suggest that several areas of policy offer potential for co-ordinated solutions to this problem, including:

As the JRF report underlines, paying the living wage to employees results in reduced welfare benefits and extra taxes. Which means that, whether the employer is Tesco or the Archbishop of Canterbury, the living wage can give people basic rights and a sense of dignity in work, while making good economic sense for the nation’s coffers.

We’ve previosuly blogged on the living wage and addressing the causes of in-work poverty.

Other resources which you may find interesting (some may only be available to Idox Information Service members):

Wealth: having it all and wanting more

The benefits of tackling worklessness and low pay

This week is Living Wage Week and the issue of workers struggling to make ends meet has been in the news again. Back on 23rd September 2014, I attended an event held by the Glasgow Centre for Population Health (GCPH) on the changing nature of work and in-work poverty in the UK, with a specific focus on Glasgow.

Over 100 delegates from across the public, private and voluntary sectors came together to learn about the latest research findings, take part in round table discussions and contribute to a panel debate on how to address the causes of in-work poverty. Speakers included experts on poverty from the Scottish Government, Glasgow City Council, Ipsos MORI, the Employment Research Institute at Napier University and the Glasgow Centre for Population Health.

She reported that, in Scotland in 2012/13 (the most recent data available), 16% of people, and one in five children, were living in poverty.

Jill noted that whilst employment was the best route out of poverty, it was no longer a safeguard against poverty as over half of all working age adults in poverty in Scotland were from households in which at least one person was in employment. Six in ten children in poverty were also from working households. Jill concluded that for poverty to decline, lower income households must have access to quality and sustainable employment.

END_OF_DOCUMENT_TOKEN_TO_BE_REPLACED 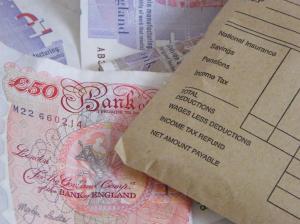 Today, (Tuesday, 1st April), is the 15th anniversary of the introduction of the National Minimum Wage in the UK.  The anniversary occurs during the second week of the Trade Union Congress’ (TUCs’) ‘Fair Pay Fortnight’, which aims to raise awareness of the problem associated with low pay, in-work poverty and the increasing cost of living in the UK. END_OF_DOCUMENT_TOKEN_TO_BE_REPLACED