“If regeneration has been so successful, why are there still so many pilots?”

This was just one of the many thought-provoking points raised at the Scottish Urban Regeneration Forum’s (SURF) 25th Anniversary Conference, where the very activity of regeneration was put under the microscope.

In a packed room of delegates, the day opened with two opposing views.

This provided a useful lens through which to view regeneration, as we moved onto a day of workshops and debates on 25 years of regeneration policy, starting from New Life for Urban Scotland all the way up to City Region Deals.

Below I’ve outlined some of the most interesting points to come from these sessions.

There was broad agreement that regeneration was about more than building homes, and that one of its core purposes was to tackle inequality.

Universal Basic Income is a policy in which everyone in society is given a sum of money, without any conditions. This policy – likely to be popular – was proposed by a delegate, highlighting its potential for addressing increasing levels of income inequality. A pilot study is already underway in Finland, with participants reporting lower stress levels and greater incentive to work. The Scottish Government has also recently committed to funding local experiments in Fife, Glasgow and North Ayrshire Councils.

In many of the debates, it was felt that community ownership of buildings and land was key to ensuring a fairer distribution of society’s wealth. Other benefits of community ownership include protecting key local services/facilities (which may have otherwise been lost) and offering better stewardship, as the community have a greater understanding of local needs.

Research has also shown that local communities – who have replaced private landlords – have outperformed the landlords they have replaced. In the past two decades, the value of their land has increased by almost 250%.

Delegates highlighted that local areas often need local solutions.  For instance, a representative from the Bute Island Alliance noted that addressing their declining population was key to their regeneration goals.

There was a strong feeling that communities had to be consulted. A representative from a local charity explained that “if you are working for a community, then it must include the community”. Others, suggested that some communities would not have the capacity to make decisions on regeneration projects. Yet, this was quickly deemed patronising, with many noting the series of failures by public officials.

Charrettes were seen as an ideal tool for consulting with communities. The Scottish Government define a charrette as:

“an interactive design process, in which the public and stakeholders work directly with a specialised design team to generate a community vision, masterplan and action plan.”

The representative from the Bute Island Alliance highlighted that this process had been very helpful in the development of their regeneration plans.

It was widely acknowledged that communities are becoming more diverse, and that it’s important to include all members of society. One delegate recounted her experience of Social Inclusion Partnerships (SIPs) – an initiative which aimed to reduce social exclusion – explaining that this model was very successful at engaging with black and minority ethnic (BME) groups. We’ve also seen the Scottish Government recognise the need to encourage young people to get involved in local planning decisions.

Regeneration has always found it difficult to respond to wider political, economic, social and technological factors. Over decades, deindustrialisation and the change to a more knowledge-based economy has caused significant challenges for communities. For regeneration policy to be successful, it was suggested that people would need to be equipped with the skills to take part in future industries; otherwise we may see inequalities widen. Cities such as Dublin have seen rents increased dramatically due to the inward migration of highly-skilled technology workers, putting pressure on household budgets and showing the challenge for regeneration.

In the past 25 years there has been an important shift in regeneration, moving from house building programmes to a more holistic approach, which includes policy areas such as health, employment, and the environment. However, the most recent Scottish Government regeneration strategy was published in 2011. It might therefore be time to revisit this strategy and provide a new vision for regeneration, taking recent learning and the changing environment into account. Maybe then, in the next 25 years, there will be no doubt over the successes of regeneration. 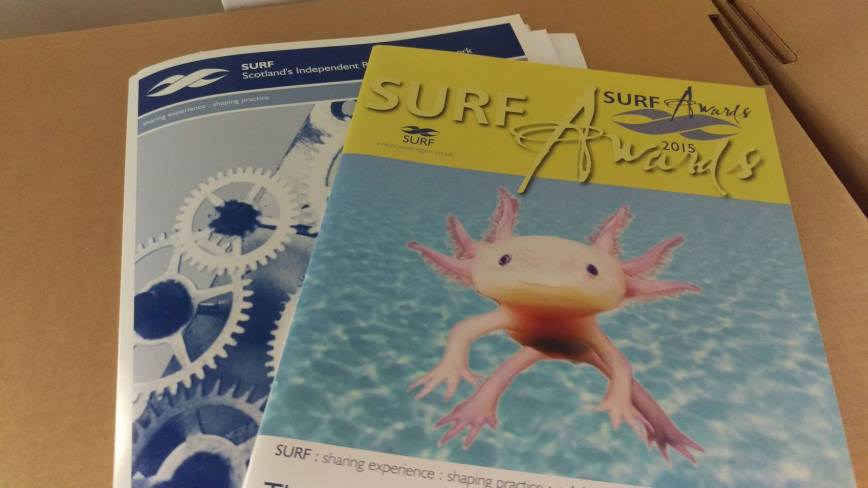 I recently attended a workshop highlighting three winning projects from the 2015 SURF Awards, an annual ceremony which recognises best practice and innovation in community regeneration in Scotland.

The day began with a presentation from the winners of ‘Scotland’s Most Improved Large Town’, Kilmarnock. From the outset, Karl Doroszenko the Development Planning & Regeneration Manager at East Ayrshire Council acknowledged that Kilmarnock had gone through some hard times, remarking that most people would associate the town with words such as ‘failing’, ‘deprived’, and ‘unemployment blackspot’.

However, for Karl, the town has a lot to be confident about. In 2005, East Ayrshire Council introduced a strategy to revitalise Kilmarnock town centre. A key part of this strategy was introducing the ‘Town Centre First Principle’, an approach which encouraged the council to locate their offices to the town centre. It also included a commitment to valuing local heritage, and over £21 million was invested in heritage buildings, including the former Opera House, which is now a modern office building for local council staff.

A Community Worker in East Ayrshire Council also provided his views on community engagement. In his words, ‘you either do it or you don’t’, highlighted the need to genuinely listen to stakeholders (businesses, voluntary organisations, and the local community) and to deliver for people. He also noted the importance of trying new ideas, and accepting that not all of these will be a success.

Barrhead, winner of ‘Scotland’s Most Improved Small/Medium Town’, had some notable similarities to Kilmarnock. For instance, Barrhead also incorporated a Town Centre First approach into its regeneration strategy – although implementation was more complicated due to the town’s fragmented centre.

But Barrhead also had its own unique set of challenges. In particular, political buy-in was difficult to achieve at times, with regeneration programmes often competing with other priorities such as education. Unfortunately, Barrhead also suffered from being a disadvantaged area within an affluent council (East Renfrewshire), sitting alongside areas such as Clarkston, Newtown Mearns and Giffnock. This limited the town’s impact when applying for external sources of funding.

Despite these challenges, Barrhead has had a number of successes, including:

The Open Spaces project, run by arts organisation WAVEparticle in partnership with New Gorbals Housing Association, was the winner of SURF’s ‘Creative Regeneration’ award. The artist-led initiative complements a major housing development in the Gorbals area of Glasgow, making a diverse set of buildings and open spaces – such as the Caledonia Road Church – temporarily available for creative uses.

The initiative is providing existing and new residents with opportunities to engage with a variety of creative projects. This has resulted in a number of benefits for the community, including:

The presentations provided inspiration for a lively debate between delegates.

Unsurprisingly, many individuals highlighted the challenges of declining public funds for regeneration programmes. There was also criticism of the short term nature of funding (two or three year periods), particularly as there was general agreement that it takes decades to see the impact of regeneration projects.

However, some of the participants suggested that this might provide an opportunity as local government has realised that they cannot do everything. Delegates noted that this could result in a greater role for the third sector, as well as increased community consultation.

Interestingly, a senior member of Glasgow City Council, gave what he called ‘a plea for understanding’, explaining that although the council would have less funding available, it did not mean they were any less committed to improving the lives of residents. He highlighted that organisations should view the council as a ‘friendly partner’ and that partnership was key to achieving change.

Delegates also discussed the conflict between overarching national strategies and locally led approaches to regeneration. It was suggested we need to ‘think nationally’ as there are too many short term projects there are never embedded into practice or strategy. Others argued that regeneration needs to focus on local people, and that not enough is being done to support a community led approach.

One delegate also used the rather inspirational phrase ‘transfer of human energy’. This refers to the positive impact that community members can have on each other if provided with the right opportunities, such as through creative projects.

The workshop was well attended and brought together a broad range of individuals, from town planners to local artists. However, what they all had in common was a desire to improve the health and well-being of residents in Scotland’s most disadvantaged communities.